So if you’ve been paying attention to entertainment news recently, you probably saw that Marvel Studios has finally announced its first project with an Asian lead. The film, Shang-Chi & The Legend of The Ten Rings, will be released in 2021 and will star Awkwafina, Tony Leung and Simu Liu as the title character. This is a big deal. It’s what Asian American filmgoers have been demanding for years; a big Hollywood blockbuster with an Asian lead, an Asian director, and even an Asian screenwriter. It’s perfect. Or is it? See, I’m very happy that we, as Asian Americans, are getting a big superhero film of this nature. But the more I looked into the movie, the more confused, and concerned, I became. END_OF_DOCUMENT_TOKEN_TO_BE_REPLACED

It’s the late 80s, and Marcus is a homeless teen with a deep hatred for Ronald Reagan. See, Reagan closed the insane asylums, and let lots of mentally ill people, including one who killed Marcus’s mom and dad, out on the street. Now, all Marcus wants is revenge. That, and to avoid the police, since the boy’s home he lived in mysteriously burned down, and Marcus was the only survivor. This last fact is what attracts the attention of Master Lin, the principal of King’s Dominion, a private school that teaches the children of criminals and assassins on how to be the best killers. Lin offers Marcus a place at his institution, and Marcus accepts, learning things like how to brew poison, shoot guns, and other assassination vitals, and all while navigating bullies, girls, and all the other high school tropes. END_OF_DOCUMENT_TOKEN_TO_BE_REPLACED 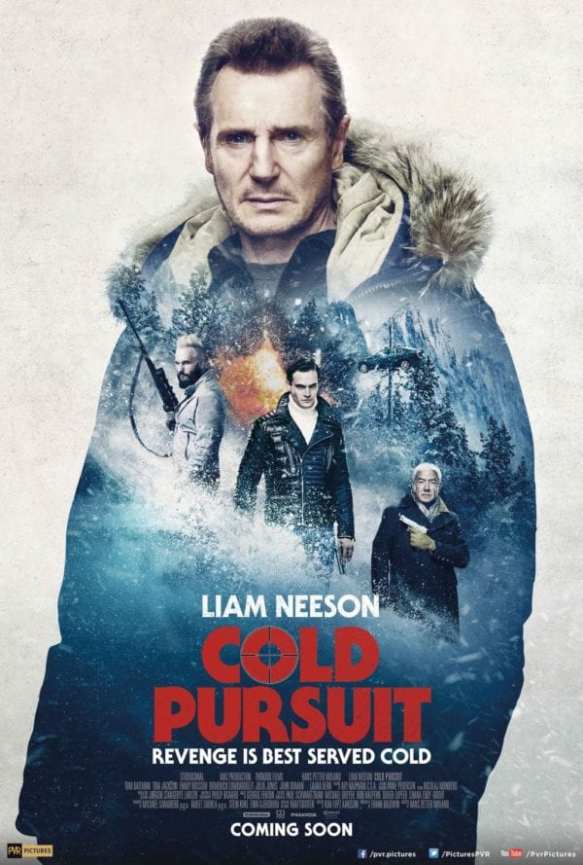 When his son, Kyle, winds up dead from an apparent heroin overdose, Colorado snowplow driver Nel Coxman becomes depressed. He grows distant from his wife, Grace, and is contemplating suicide when one of his son’s co-workers, Dante, reveals that Kyle’s death wasn’t an accident. Kyle stole some drugs from the local kingpin, Viking, and Viking had him killed. Realizing the truth, Nel arms himself, and begins picking off Viking’s men, one by one. Unfortunately for him, Viking believes these murders to be the work of another, Native American gang, and soon a fullfledged turf war is in swing, with the outmatched Nel at the center. END_OF_DOCUMENT_TOKEN_TO_BE_REPLACED

Two years after the caper in Bangkok, young Qin Feng is reunited with his uncle in New York. The two have been summoned, along with the rest of the world’s greatest detectives, to solve a series of Feng Shui themed murders that have been taking place in Chinatown. If they find the killer, they win $5 million, and will be listed as the Earth’s greatest sleuths on the International Detective App. (Because that’s a thing, apparently). So, with the stakes in place, the genius/dumb-ass duo set out to solve the murders, make some cash, and, hopefully, find love along the way.
END_OF_DOCUMENT_TOKEN_TO_BE_REPLACED

In 1920s Japan, 9-year-old Chiyo and her sister, Satsu, are sold to pay off their impoverished families debts. Chiyo is purchased by a Geisha house, while Satsu is sent off to a brothel. At the Geisha house, Chiyo encounters the ruthless Hatsumomo, who, fearing that the young girl will grow up to replace her, makes her life a living hell. All this cruelty nearly breaks Chiyo, until, one day, she is shown a small act of  kindness by The Chairman, played by Ken Watanabe. This motivates Chiyo to become a Geisha, and she spends the next several years training in the art of music, dance, and conversation. Finally, after her instruction is complete, Chiyo becomes Sayuri, a Geisha of incredible beauty and influence. She even finds The Chairman again, who claims not to recognize her after all these years. Things are looking up, until World War 2 breaks out, sending Chiyo’s life, once more, into turmoil.
END_OF_DOCUMENT_TOKEN_TO_BE_REPLACED

How are you all this jolly January day? Are you comfortable? Are you warm? Are you snuggled up in bed with someone you love? If so, you might want to stop reading this review right now, because it’ll likely make you feel cold and empty inside. That’s certainly how I felt after I finished reading today’s novel. “What novel is that?” you ask. Why In The Miso Soup, a horror story from Japanese author Ryu Murakami.

Now, I’m just going to put it out there, I really, really, REALLY didn’t like this book. It’s dark, twisted, sexist, and thoroughly xenophobic. I feel that it’s my civic duty to warn you all about it. But, before I go any further, I feel I should provide some background.

So, for those of you who don’t know, the author of this book, Ryu Murakami, is fairly famous, or infamous, in his native Japan. His 1976 debut novel, Almost Transparent Blue, was a huge critical and commercial success, even winning that year’s Akutagawa Prize; the Japanese equivalent to the Pulitzer. It dealt with disillusionment, drug use, promiscuity, and the influence of Rock and Roll on young people. And even though it lacked a clear narrative, the book was praised for capturing the spirit of the time, and Murakami was hailed as a counterculture hero, and even likened to figures like Jack Kerouac and Hunter S Thompson.

As time went on, however, his writings grew consistently darker and less accessible. Novels like Piercing, Audition, Coin Locker Babies, and Popular Hits Of The Showa Era were either trashed by critics, or became lightning rods for controversy due to their extremely graphic violence and bizarre content. People also started to notice trends in his writing, like the fact that all the female characters in his books are either prostitutes, psycho, or both. In this respect, Murakami is not unlike the American comic book writer Frank Miller, who won tons of critical praise in the 70s and 80s for returning characters like Batman to their darker roots, but is now lambasted by most people for sexist portrayals of women, and excessive amounts of violence in his work.

But perhaps no single book encapsulates everything that Mr Murakami is, or was, than his 1997 novel, In The Miso Soup. It’s got sex. It’s got violence. It’s got characters whining about how messed up Japan is. It’s the story of Kenji, a 20-something Japanese man who takes foreigners on night tours through Tokyo’s red light district, and follows the same basic premise as the movie Collateral. There’s a guy who takes people to various places in the big city, no questions asked, one night he gets a client whom he finds suspicious, things start to get violent and crazy, and the story becomes one of survival, as the main character tries to get away from this dangerous individual. In the case of In The Miso Soup, the dangerous client is a fat American man named Frank, whom it is later revealed is a serial killer, occultist, rapist, and necrophile. How charming. And what makes this even worse is the fact that Frank, an absolute monster, is not the most disgusting character in the novel. See, you don’t really like Kenji, the main character and narrator, because it’s revealed early on in the book that he’s dating a 16-year-old girl. And while you could make the argument that he’s not a pedophile, because maybe the age of consent is different in Japan, he’s still really annoying and xenophobic. Every few pages he’ll stop and whine about how Japanese people are like robots, how, since the economic boom, they’ve lost all interest in things that are real, that they’re all lonely, walking corpses, blah, blah blah. He also talks about foreigners in a really condescending, bigoted manner. He says that the Chinese are stupid and dirty, that all Americans are naive, greedy assholes, and so on. He also uses the term gaijin, a fairly xenophobic slur, to refer to foreigners. (Sigh).

Look, I’ve read tons of books that are critical of America before, but none of them made me angry like this one. Maybe it’s because, more often than not, those other books are written BY AMERICANS. And even if they aren’t, like the last book I reviewed on this blog, The Reluctant Fundamentalist, they usually try to provide a more balanced portrayal of the US. The Reluctant Fundamentalist shows good Americans, and bad Americans. When you read it, you can tell that the author had actually visited, and maybe even lived in, the United States. In The Miso Soup doesn’t have any of that. Frank, a fat, sadistic, corpse-raping serial killer is the only American we get to see in the entire story. It’s clear when you read this book that Murakami has never visited the US, and doesn’t care who he offends. Looking back on this novel, I feel reminded of Sax Rohmer’s Fu Manchu series from the 1920s, books that are so casually racist and ignorant of fact that its not even funny. The only different here is that it’s the Asian people stereotyping Whites, instead of the other way around.

All I can say is that, unless you want to read a book where every woman is either a prostitute or a bitch, the main character is a xenophobic pedophile, and the antagonist is the most vile and disgusting American stereotype imaginable, don’t buy this novel. It’s a 4 out of 10. I hated it, and feel ashamed for having read it. Be smarter than I was, and avoid it like the plague.

Sex, philosophy, and high octane thrills–these are the first things that come to mind when I think of Sense8, the latest Netflix original series to hit the small screen. Written and directed by the Wachowskis–most famous for their work on The Matrix Trilogy, V For Vendetta, and more recently, Cloud Atlas—Sense8 follows a group of eight strangers from various parts of the world who, one day, become psychically linked, and find themselves able to see, hear, smell, touch and taste what the others do. The eight in question are Will, a Chicago police officer, Riley, an Icelandic DJ, Nomi, a transgender hacker from LA, Lito, a closeted gay Mexican actor, Kala, a Mumbai pharmacist, Capheus, a Kenyan bus-driver, Wolfgang, a German locksmith, and finally, Sun, a South Korean businesswoman. Each of them quickly becomes aware of the others’ existence, acquiring skills and habits that they originally did not possess, and even learning how to communicate with one another, despite all speaking different languages. Things only get worse when a mysterious man named Jonas appears and tells them that they are all being hunted by an unknown organization that wants to kill them. And, well, the story just gets crazier from there on in. END_OF_DOCUMENT_TOKEN_TO_BE_REPLACED