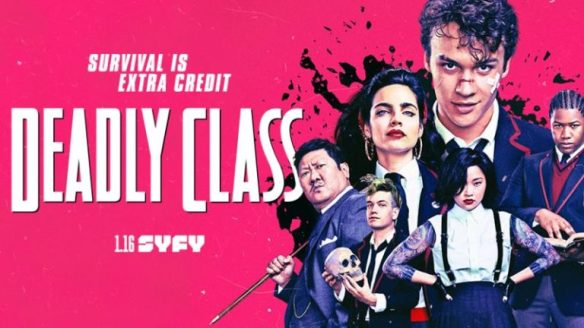 It’s the late 80s, and Marcus is a homeless teen with a deep hatred for Ronald Reagan. See, Reagan closed the insane asylums, and let lots of mentally ill people, including one who killed Marcus’s mom and dad, out on the street. Now, all Marcus wants is revenge. That, and to avoid the police, since the boy’s home he lived in mysteriously burned down, and Marcus was the only survivor. This last fact is what attracts the attention of Master Lin, the principal of King’s Dominion, a private school that teaches the children of criminals and assassins on how to be the best killers. Lin offers Marcus a place at his institution, and Marcus accepts, learning things like how to brew poison, shoot guns, and other assassination vitals, and all while navigating bullies, girls, and all the other high school tropes.

Deadly Class is not a great show, but it is a fun one, and for many people, myself included, that will be enough. It’s got a cool concept, some impressive fight scenes, a great visual style, including lots of animated segments, and terrific acting. I’d really like to emphasize that last fact since the cast is probably the series’ strongest asset. Lana Condor is unrecognizable as Saya, the tattooed Yakuza assassin. Benedict Wong just chews the scenery as Master Lin. And the actors who play Willie, Marcus’s best friend, and Billie, a nerdy punk rocker, are fantastic. There’s also some funny moments regarding comic books, like a scene where someone pulls a gun on Marcus when he says he doesn’t like X-men, that both act as a fun bit of inside baseball for people who know that this show was based on a comic book, and a little bit of commentary on the mean-spirited fan base that has unfortunately grown up around comics recently. And the fifth episode, “Saudade” is genuinely great. It’s about the characters going on a road trip to Vegas. There are a lot of drugs involved, so it’s probably the most colorful and visually dynamic, with tons of fun, frantic editing. It also ditches the classroom setting and just allows the characters to interact and have fun with each other. This episode also features some of the shows darkest moments, like when one of the characters is forced to kill his own father and is shown, not just having doubts, but feeling incredibly conflicted afterward. By this point, we’ve seen these ostensibly underage kids kill countless people, and yet, this is the very first time where it feels like we’re watching underage kids kill people. They get scared. They drop their bad boy posing for a minute and show genuine vulnerability. And it works. You feel bad for them, and truly understand what they’re going through.

Now, with all that said, I do want to reiterate that Deadly Class is not a great show. At best, it’s a guilty pleasure, something you watch and have fun with, but don’t take too seriously, because you shouldn’t. It’s got some really silly aspects to it. First of all, there’s a lot of voice over from Marcus, and some of it gets laughably pretentious. He’ll say things like “we’re all just capitulating assholes” and “morality is just junk food for our brains” totally un-ironically. On top of this, the show traffics pretty heavily in stereotypes. Literally, every clique in the school is based on racial identity. There are White supremacists, Mexican Gang-bangers, Yakuza, Black Nationalists, etc. And the show can’t help but follow high school tropes, like having there be a dance and a cheerleading squad. I get that these characters are young, but why would they need a cheerleading squad? Do they have a sports team to support? Do the killer cheerleaders compete in statewide tournaments? I know I’m thinking about this too hard, but it speaks to a wider problem with the show, that being the fact that for all of its bad-boy posing, and foul language, Deadly Class actually comes off as kind of tame, and a little too familiar for fans of the high school drama genre. This is a school for killers. They shouldn’t be worried about silly things like dances and cheerleading tryouts. The final issue I have is the fact that all the women of the show inexplicably love Marcus. Like, both Saya and Maria, the two female leads, are instantly attracted to him the minute he arrives at King’s Dominion, despite the fact that he really doesn’t have a personality. And while, yes, he’s good looking, so is everyone else at this school. It’s a school in a TV show. I hate it when movies and TV shows will have women fall for men when the men haven’t done anything to deserve that attention.  It’s a clear example of the male gaze, of media being created by straight men, with a straight male audience in mind.

In the end, I can only recommend Deadly Class if you like the cast, are a fan of teen dramas and comics, and can stomach some silly moments. If you think that’s you, give the show a look. If not, well, don’t. It’s up to you.