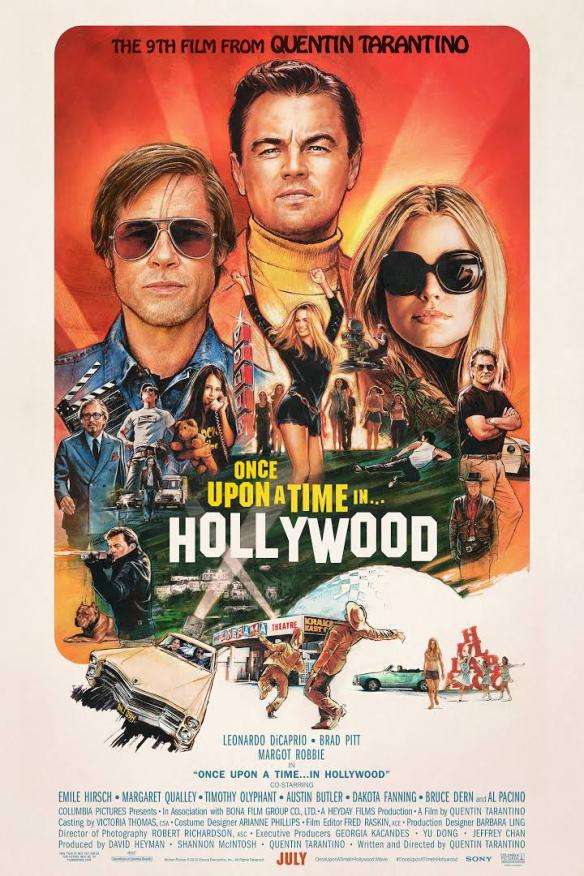 It’s 1969, and Rick Dalton (Leonardo DiCaprio) is a fading, Western actor, struggling to maintain relevance in a rapidly changing Hollywood. His only friend is his driver, and longtime stunt man, Cliff Booth (Brad Pitt), a Vietnam vet whom it is heavily implied murdered his wife. The two spend their days driving around LA, getting drunk, watching Rick’s various TV appearances, and debating about whether or not the latter should take an offer to make Spaghetti Westerns in Europe. Meanwhile, Hollywood director Roman Polanski and his wife, Sharon Tate (Margot Robbie), have just moved into the house beside Dalton. Dalton sees in Polanski a chance to become legitimate again, and eagerly tries to get in their good graces. Something that could throw a wrench in his plans, however, is a small, delusional band of Hippies living out in a place called Spawn Ranch, who may or may not be hatching a murder scheme. END_OF_DOCUMENT_TOKEN_TO_BE_REPLACED

Greetings Loved Ones! Liu Is The Name, ANd Views Are My Game.

If you’ve ever read any works of literary or cinematic criticism, you’ve probably noticed that the phrase “style over substance” gets tossed around a lot. Most of the time, the expression is used to describe sci-fi, action, or fantasy films that are more interested in looking nice than having coherent stories, or likable, well-rounded characters. Well, having just seen The Revenant, the latest film from writer-director Alejandro González Iñárritu, I can assure you, the same principle holds true for artsy movies.

Set in the 1820s, on the Missouri River, The Revenant is a very loose re-telling of an actual event concerning the famous Mountain Man, Hugh Glass. In both the movie and real-life, Glass gets mauled by a bear, left for dead by his men, and then sets out on a path of vengeance. That, however, is where the similarities end, because this movie takes SO MANY liberties with history, it’s not even funny. In real life, Glass constructed a raft, floated downstream until he reached his men’s fort, and then FORGAVE them for leaving him behind. In the movie, by contrast, Glass not only gets left behind, but he’s also forced to watch one of his men, Fitzgerald, murder his son. This causes him to embark on a deranged, blood-soaked voyage, which involves him killing more or less everyone and everything he comes into contact with, and ends with a climactic battle between him and Fitzgerald by a riverside. Now, to my knowledge, the murder, and existence, of Glass’s son, as well as the battle between him and Fitzgerald at the end, are all completely fictional. But, as many of you will no doubt point out, this movie is not a documentary. It is a work of fiction. It is, therefore, not obligated to tell the whole truth, the full truth, and nothing but the truth. So, historical inaccuracies aside, is it any good?

Well, on the one hand, yes it is. The acting in this film is beyond superb. Leonardo DiCaprio, whom plays Glass, does an absolutely astounding job in this movie. There’s so much dangerous, physically-demanding stuff that he has to do–including getting mauled by a bear, thrown off a cliff, tossed through rapids, and sleeping inside the carcass of a dead horse–that I’m honestly kind of shocked he’s still alive. In addition to this, the cinematography is astounding. Much like his last film, Birdman, González Iñárritu includes a lot of long takes in this movie, where he moves the camera around the whole location so you can see everything, instead of just cutting to different objects or characters. Finally, and I cannot emphasize this enough, this film is absolutely gorgeous to look at. Shot on location in British Columbia and Southern Argentina, the film contains some of the most beautiful landscapes I’ve ever laid eyes upon. What makes it even better is that none of the images are artificial. The director stated that he wanted to make this movie seem as natural as possible, and so they didn’t use any CGI or artificial lighting. They used sunlight, moonlight, firelight, and the wilderness around them to tell the story, and that level of ambition from a mainstream Hollywood director is extremely impressive. Watching this movie reminded me of the early works of Werner Herzog, like Aguirre: The Wrath Of God, where the director really demanded a lot from his cast and crew, and basically put them through hell to get the best possible product. It’s both good, and frightening, to know that there are still some artists out there willing to sacrifice anything for their craft.

But, all it’s artistic ambition and visual tricks aside, The Revenant still suffers from an excessive amount of violence, overly simplistic characters, and a lack of a clear moral center. Lajos Egri, author of The Art Of Dramatic Writing, wrote that all great stories must contain a premise, a theme or hypothesis that the author has to prove with his or her narrative. Romeo and Juliet’s premise is “Great Love Conquers Death.” Macbeth’s premise is “Violent Ambition Leads To Its Own Destruction.” Without a premise, Egri asserted, stories lose focus, and it becomes harder to get invested in them. Keeping this in mind, it becomes easy to understand why I never felt fully interested in The Revenant. Yeah, it looks pretty, but I don’t learn anything from it. I just watch a guy get screwed over, do everything in his power to get revenge, and that’s it. No themes are ever established, or touched upon throughout the story. You also don’t learn anything about any of the characters besides Glass. They’re just kind of there, and so you don’t really care when they die or get hurt. And it’s not like I can write this movie off as idiotic, “turn your brain off” entertainment, because when you watch the movie, it’s clear that the filmmakers are too smart and too ambitious to make a picture like that. The fact that they used all these complicated shots, the fact that they chose not to use CGI or studio lights, and the fact that they include a lot of really surreal imagery–like a bird rising from a dead woman’s chest, and Renaissance paintings on the walls of caves–make it clear that they wanted to create something meaningful and lasting with this. I just don’t think they did.

So, in the end, should you go see The Revenant? Honestly, I think you should. The camera work, the performances,and the imagery are all amazing. Just don’t expect great writing, and be prepared to see a lot of really disturbing violence. It’s a 7 out of 10.