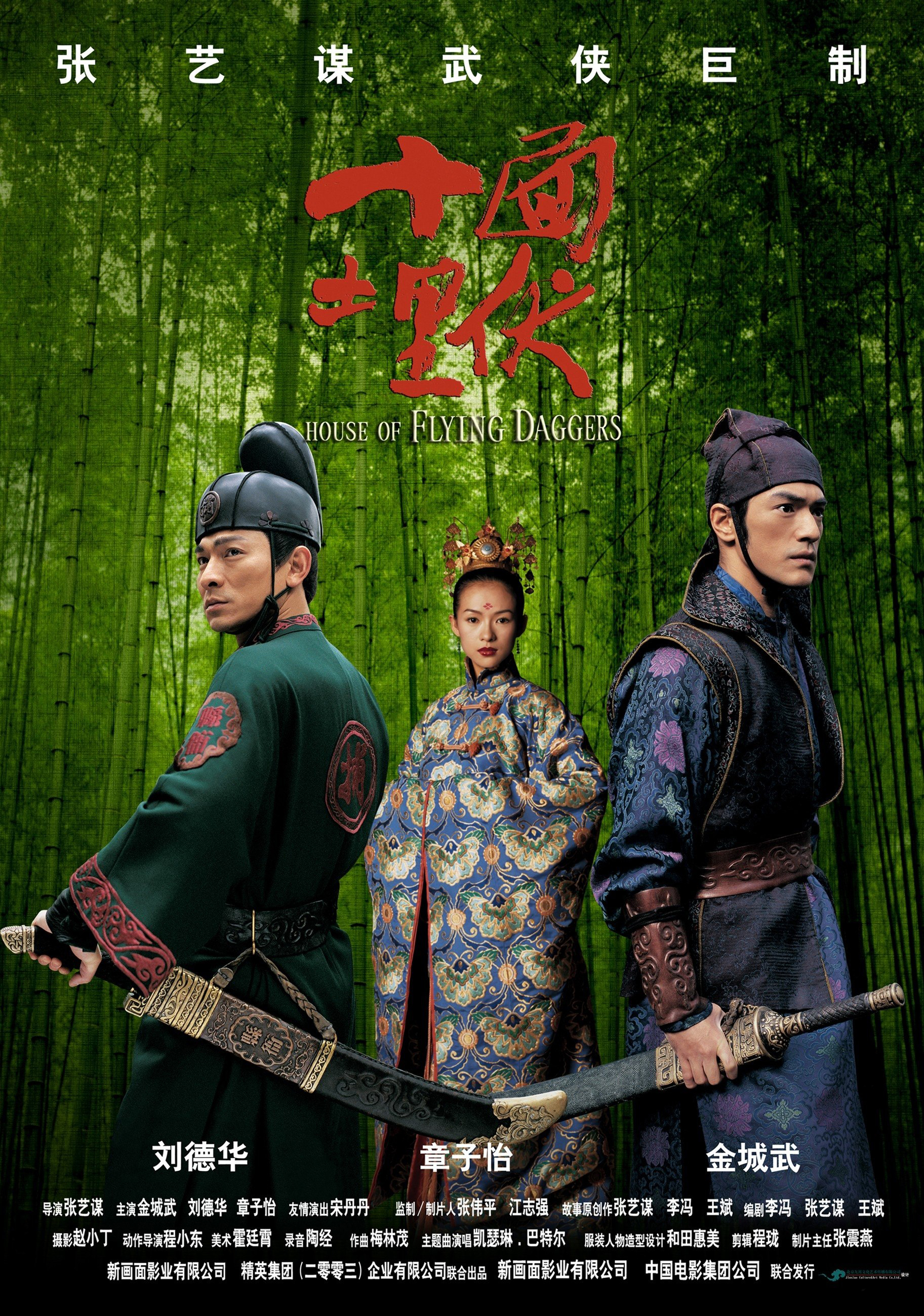 The Tang Dynasty is in shambles. The government is both corrupt and weak, and, every day, it loses more ground to the House of Flying Daggers, a popular rebel group. So, in a desperate ploy to bring the insurgents down, the Tang give two detectives, Leo and Jin, ten days to find and kill the head of the cell. Believing that Mei, a blind dancer at a local brothel, might have connections to the rebels, they arrest and interrogate her. But when Leo decides that they might be able to use Mei to lead them to the group, Jin springs her out of jail, pretending to be sympathetic to the insurgent’s cause. As they travel north, towards the Daggers encampment, however, Jin finds himself growing closer to Mei. So much so that, when they finally find the Daggers, he might not want to bring them down after all.

House Of Flying Daggers is beautifully-shot, and superbly acted. And it’s the sort of film that only makes sense to the eye. What I mean by that is, many things happen in it that work as pure eye candy, or visual representations of character’s psyches–like a scene suddenly shifting from summer to winter. But when you actually stop and think about it, none of the movie makes sense. And I mean none of it. If you consider this movie’s plot or characters even slightly, the whole thing comes flying apart. This all stems from a veritable marathon of twists that get revealed within the last 20 minutes of this 2 hour movie. First, you find out that Mei isn’t actually blind. Next, you find out that the Madam of the brothel where she worked is actually the head of the Flying Daggers. Except, as you learn just a few minutes later, she’s not really. Then you learn that Leo, who’d been using Jin and Mei to track the Daggers, was actually a member of the Daggers the whole time, and in love with Mei. None of these twists are built up to in any manner, and when you stop and think about them, none of them make sense. First, why would Mei pretend to be blind? How does that help her? There are several points in this movie where characters trick her, or sneak up on her, because they know she can only hear them. Except, as it turns out, that’s not true. She can see them. So how would they be able to sneak up on her? Why would she let them sneak up on her? Next, why were she and the leader of the Flying Daggers in a brothel?  What was their goal in doing so? To seduce people? To gather intel? Was it even a brothel to begin with? How did they infiltrate it? Third, if Leo was a member of the Flying Daggers the whole time, why would he arrest Mei? Why would he use her to find the Daggers? Doesn’t he, as a member, already know where they are? These are just a few of the many, many, many questions you find yourself asking when you start to think about this movie and it’s twists. And that’s not good.  A film’s narrative logic should be air tight.

But, you know what? I can forgive logical errors. Those mistakes happen in filmmaking, and, oftentimes, you don’t spot them until you’re done shooting. What I can’t forgive is rape, and this film has no less than three attempted rape scenes in it. Mei’s character is molested by both her male love interests, on multiple occasions. No, they never fully rape her. But they do grope her without consent, and tear off her clothes. Thankfully, each time they do so, someone intervenes. But that doesn’t make up for the fact that this movie has the balls to show her getting molested, on multiple occasions, and then have her fall in love with the assholes who groped her. I find this crude, misogynistic sentiment to be utterly revolting, and I think it’s long past time we stopped using it in our art. No one asks to be raped. No one enjoys being raped. No victim of rape ever falls in love with their rapist. Why, filmmakers, can’t you accept that?

Guys, if it seems like I’m angry, it’s only because I expected so much more from this movie. You’ve got one of the most talented directors in the world, Zhang Yimou, behind the camera, and one of the most talented actresses of all time, Zhang Ziyi, in front of it. And to be fair, they both do their part. The cinematography, costumes and color palate are all exquisite, as you expect from a Zhang Yimou picture. And Zhang Ziyi gives a believable, heartbreaking performance as Mei, also as you’d expect. But the script just isn’t up to the same level that they are. It relies too much on twists that are never built up to, and its sexual politics are beyond disgusting. For that reason, I can’t recommend you all see this. Maybe watch some of the fight scenes on YouTube, but definitely don’t buy or rent the whole movie.